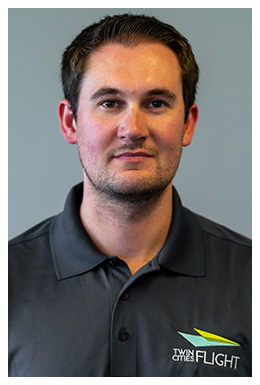 Kyle grew up in Saint Cloud and knew from a young age that he wanted to have a career in aviation. Growing up in a family where both his parents worked for the airlines and the corporate aviation world, he was always around airplanes or at least the talk of aviation. He went on to receive his Private Pilot certificate when he was a senior in high school while he worked as a lineman at the Saint Cloud Regional Airport. He then went on to pursue an aviation degree at Minnesota State University, Mankato where he received the rest of his certificates and ratings.

He has now been an instructor at Twin Cities Flight for over two years. His next step is pursuing a career as an airline pilot, but he remains involved as a Flight Instructor until that day comes. Some of his hobbies outside of aviation include ice fishing, snowmobiling, hunting, watching sports, and spending time on the lake at his cabin.

Twin Cities Flight provides you direct CFI access to have your questions answered. You may want to know more about training prices, aircraft rental, training schedules, pilot certificates, or simply what your next steps should be. Drop us a line and we will have you cleared for take-off!